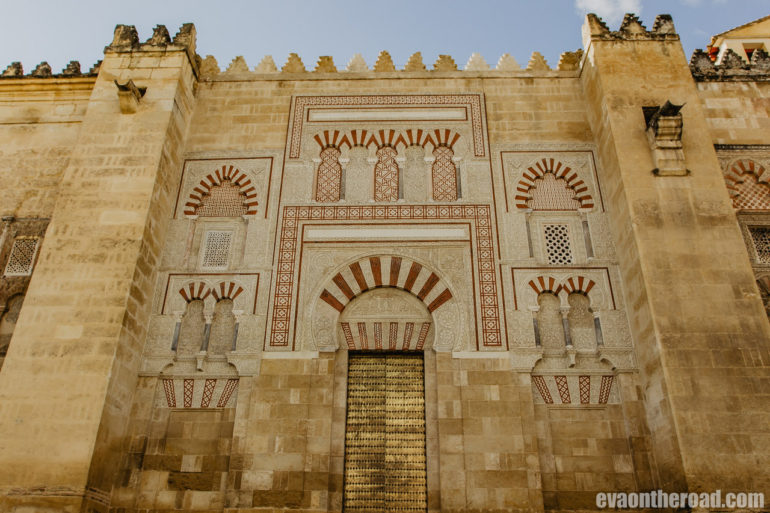 Cordoba is located in the very heart of Andalusia on the banks of the Guadalquivir River. Its history dates back to the years of BC, since the 7th century AD it had been the capital of a major Arab dynasty and even one of the largest cities of Western Europe. Wise philosophers, scholars from all over the world, knowledgeable artists and wealthy merchants have met here. Throughout its long history, many historically important nations have taken turns in Cordoba. Muslims, Jews and Christians have always lived here side by side and the city still involves traces of these different cultures. You can admire a magnificent mosque, Christian cathedral and churches, an ancient Roman bridge, remains of a Roman temple, luxury palaces and the Jewish Quarter with a synagogue. In short, Córdoba is a city of contrasts and it is not for nothing that it is inscribed in the UNESCO World Heritage List. 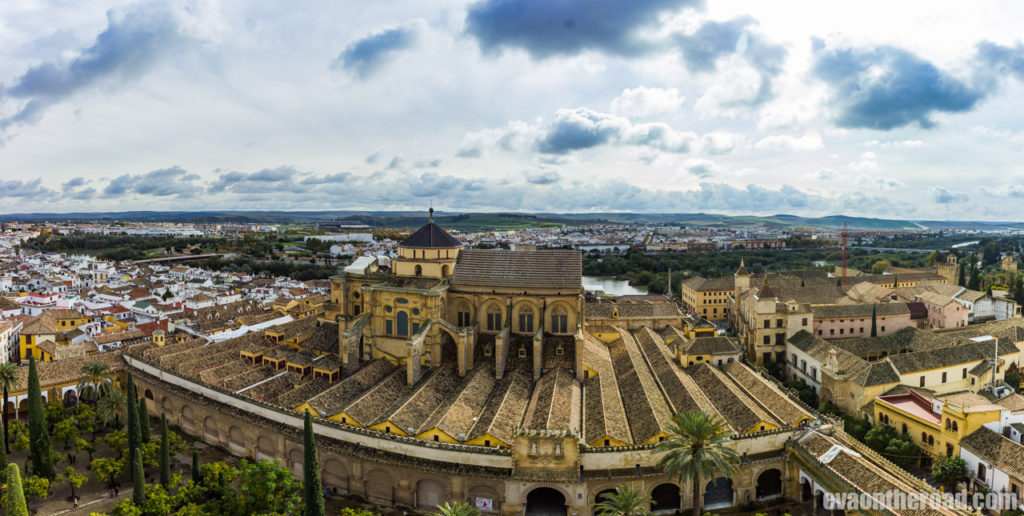 What interesting to see

Mezquita – the landmark and highlight of the city. The reason, why millions of tourists visit Cordoba every year. You may find it strange, but it’s a mosque and a cathedral in one. In 785, Arab emir Abd ar-Rahman I. began to build a medieval mosque and he wanted it to be as large as the Grand Mosque in Damascus and as magnificent as the Temple of Rock in Jerusalem. The mosque was built on the site of a Roman temple and a later Visigothic church, whose columns were used to build the mosque. Over the next 200 years, the building was further expanded and supplemented with new elements. In 1236, the city was conquered by Christian King Ferdinand III. Castilian, and there was a question of what would happen to the Muslim mosque. Fortunately, there was no demolition, but the Christian cathedral was added to the mosque and today we can admire this unique architectural phenomenon and experience a Christian mass in a mosque. The Mezquita covers 23,000 square meters and is one of the largest sacral buildings in the world. As soon as you enter the mosque-cathedral, you will be amazed by a forest of white-red arches that are supported by 856 columns (precisely these are from the original remains). From the main entrance you can see Mihrab – a shell-shaped prayer niche in a wall facing Mecca. It is a real pearl of the whole building. Gold mosaic cubes weighing 1,600 kg were created by Byzantine artists as early as in the 10th century, but they shine as if they were a few days old. Just in front of Mihrab there is Maksura – a separate part for ruler. 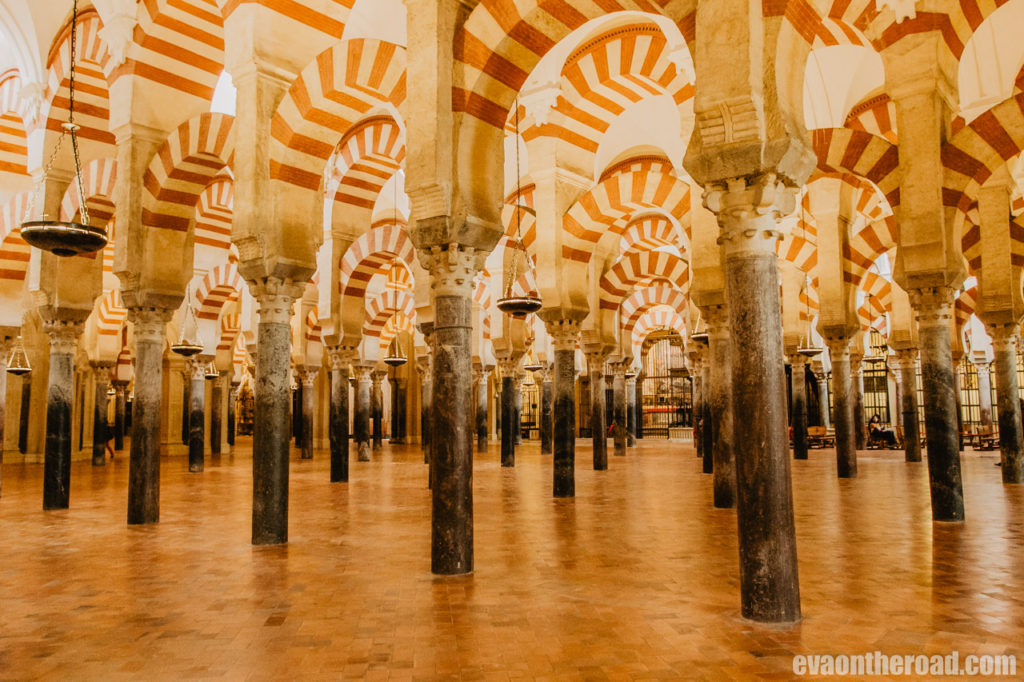 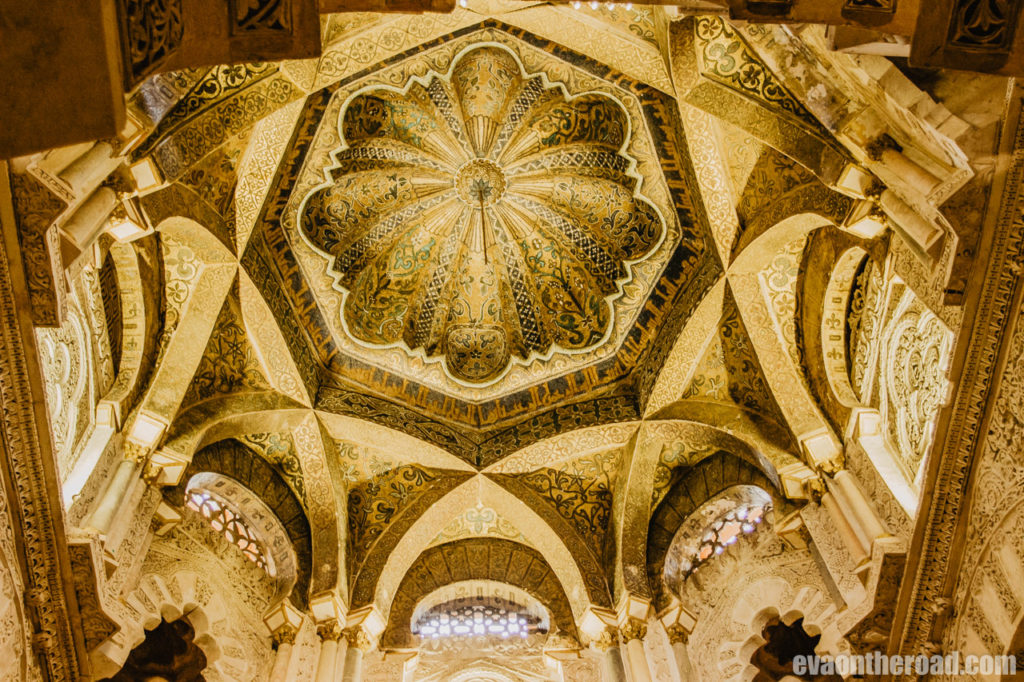 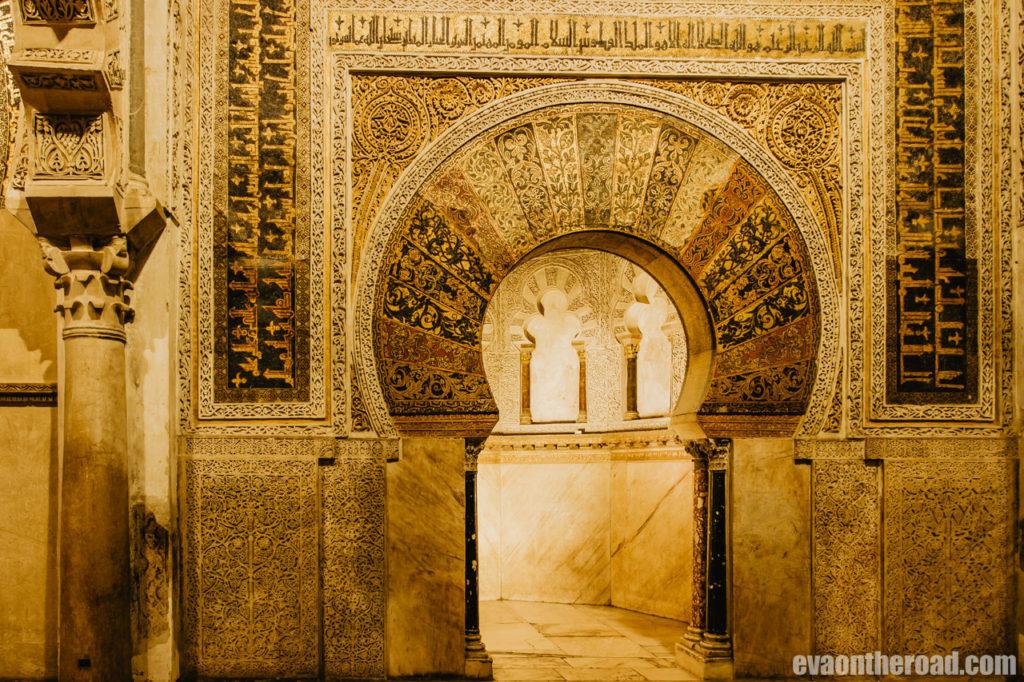 After you enjoy the Muslim part of the building, move to its centre where you will find a Christian cathedral with Capilla Mayor from the 16th century, and a massive choir with carved mahogany benches. Before leaving, raise your eyes to a baroque ceiling of the cathedral. 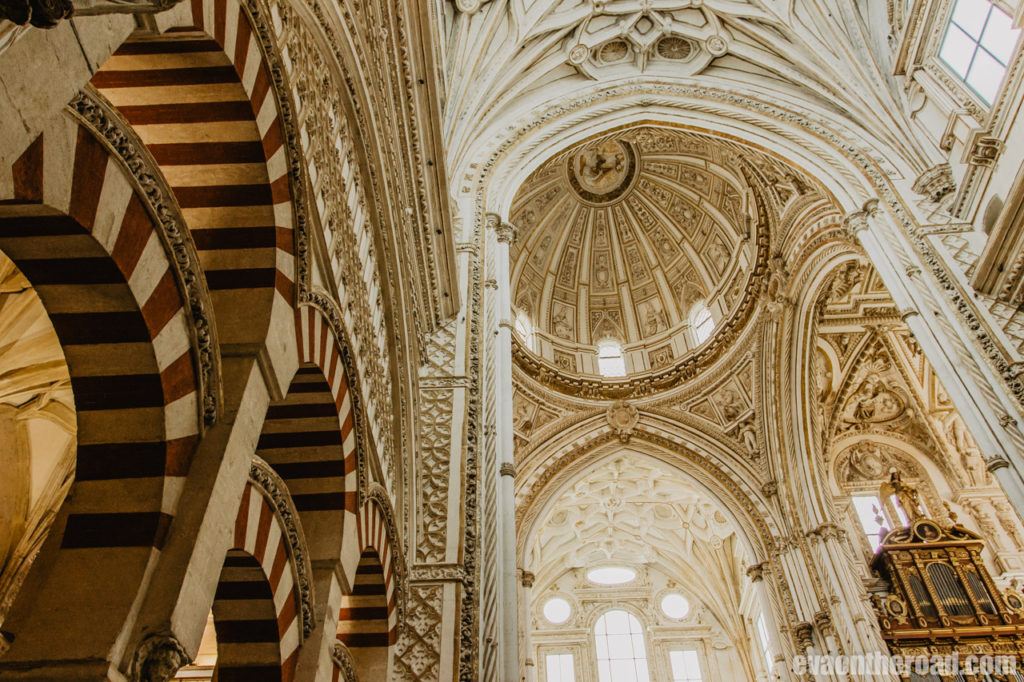 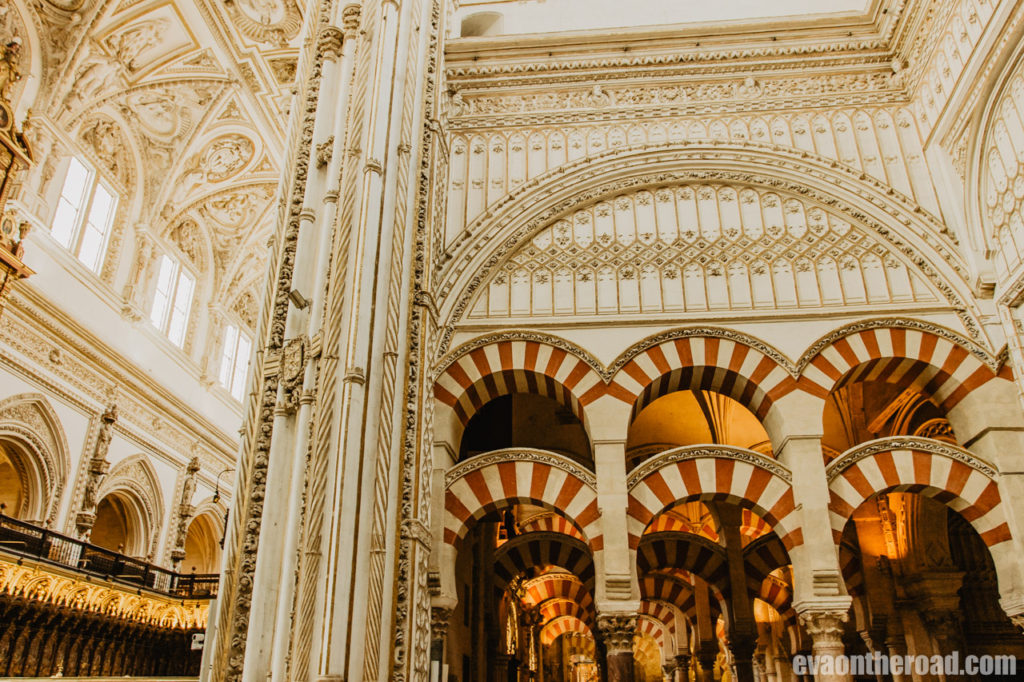 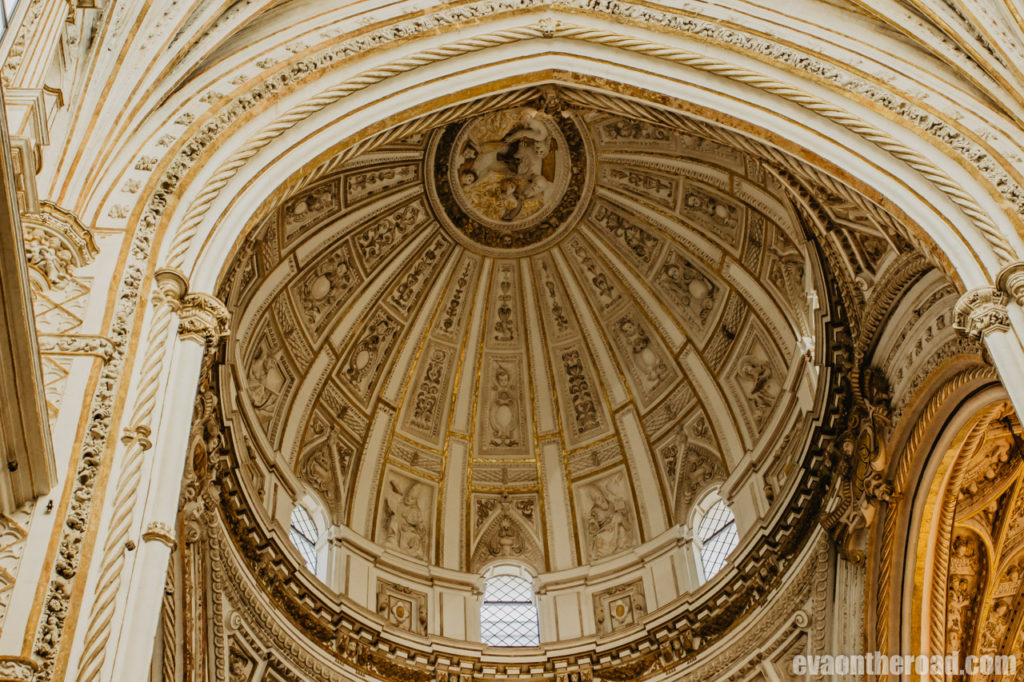 The extensive complex also includes a beautiful garden called Patio de Naranjas (Orange Yard), which is full of palm trees and (as the name suggests) orange trees. The court originally served as a place for ritual cleansing, so sit under one of the trees and imagine what the place probably looked like in the days of advanced caliphate (Islamic rule). To make matters worse and to see how majestic Mezquita is, climb the baroque bell tower of Torre del Alminar. It is open for small groups every half an hour, and from up there you will have the whole city of Cordoba in your hand. Admission: Patio de Naranjas can be visited and walked through free of charge at any time of the day, the bell tower´s entrance fee is EUR 2 and EUR 10 is entrance to the mosque. However, if you wake up early, every day (except Sunday) from 8:30 am to 9:30 am, admission to the mosque is free. After that you will be uncompromisingly chased out by security, because the Mass begins. We were in the whole complex several times during the day and there were always a lot of people. Here it really pays to get up early. First, you save money and second, you will have relative peace in the morning for sightseeing. 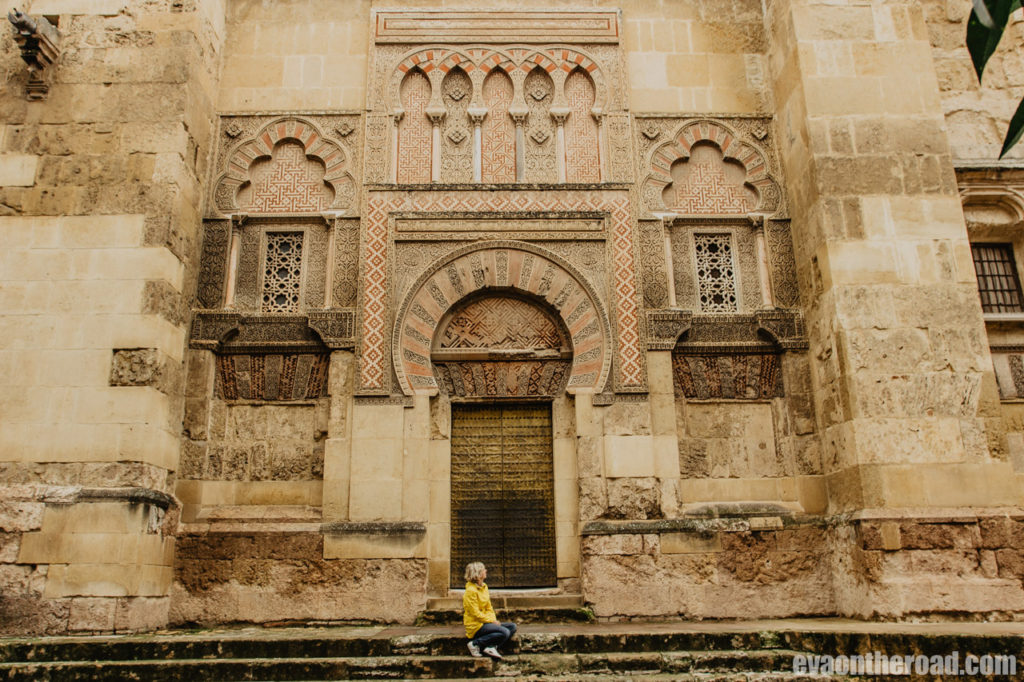 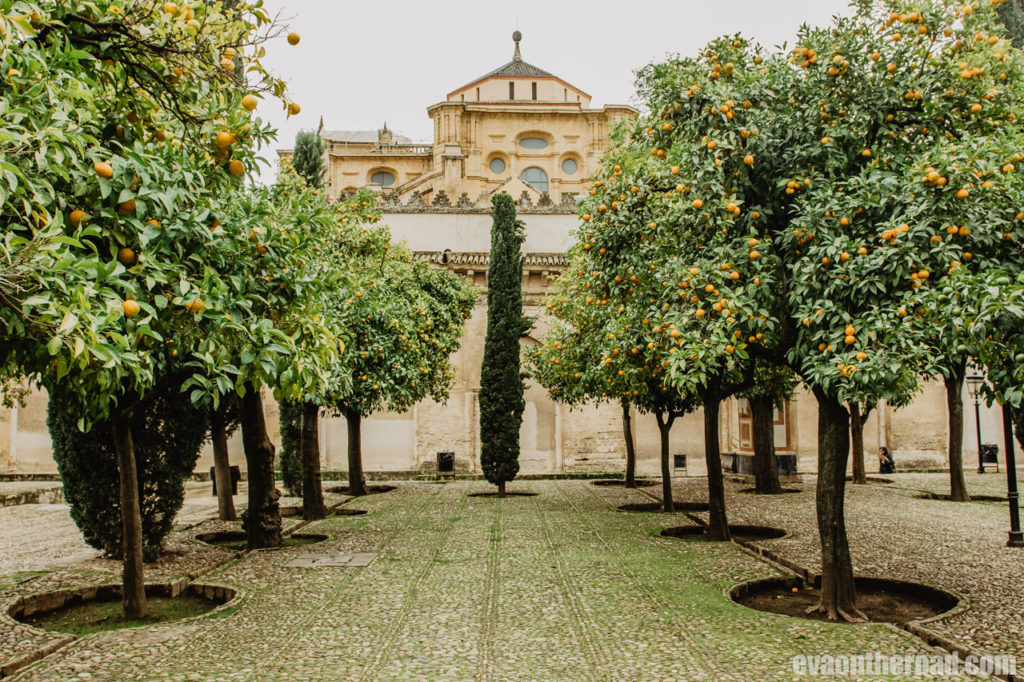 Puente Viejo (Romano) – the ancient Roman bridge connecting the two banks of the Guadalquivir River is situated a short walk from Mezquita. It is 331 meters long and has 16 arches. Only two of them are originals, the others did not survive wars and battles. At one of its ends there is the medieval defence tower Torre de la Callahorra, where you can visit a museum with Andalusian history. Not far from the bridge downstream you will see a renovated Arabic mill (water) wheel. 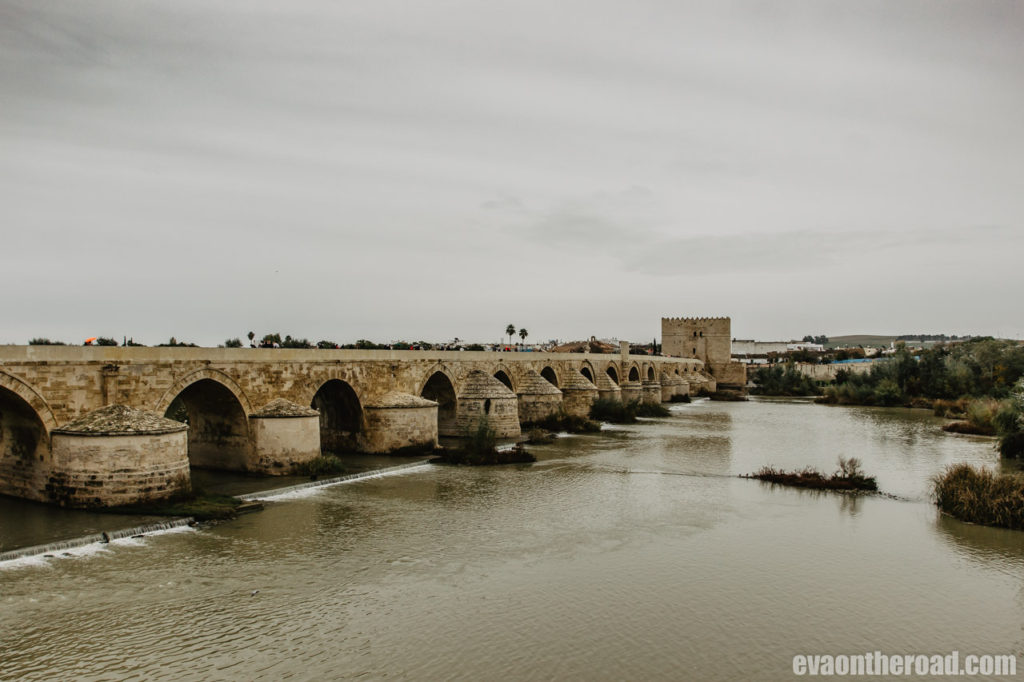 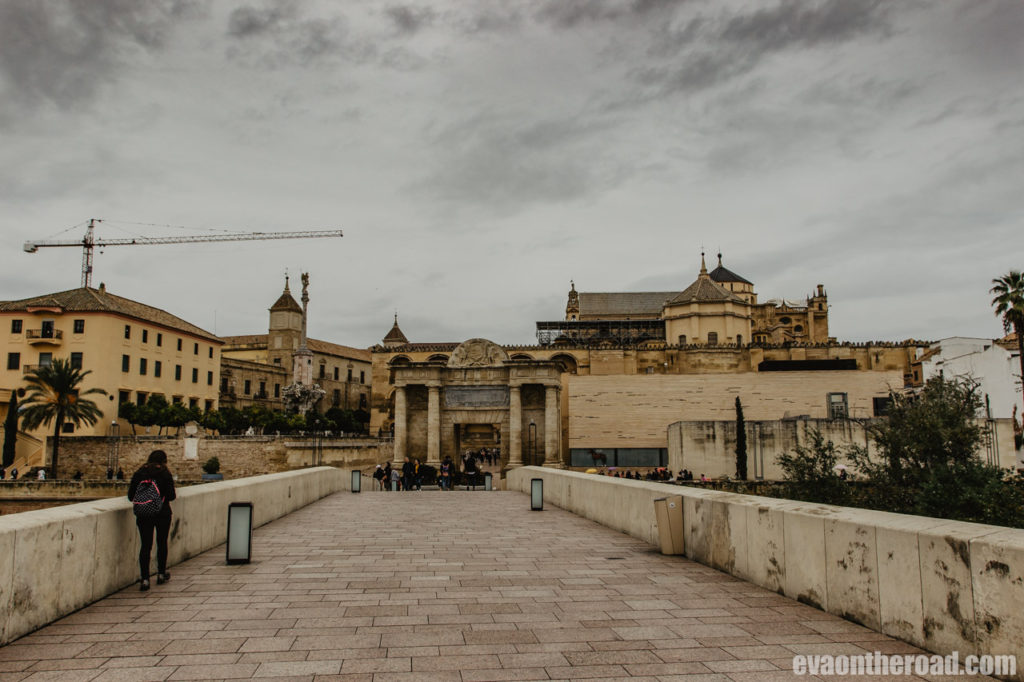 Alcázar de los Reyes Cristianos – the majestic building of the Palace of the Christian Kings again close to Mezquita. Ferdinand and his wife Isabella were based here, and it is said that Christopher Columbus was introduced to them for the first time here in 1486. In one of the halls, Roman mosaics are exposed, otherwise you will not find much here. The pride of the complex is a huge garden with perfectly decorated ornamental trees, flower beds full of flowers, fountains and water reservoirs. Admission: every Thursday from 18.00 to 19.30 you can enter for free, otherwise you will pay 4.50 EUR. 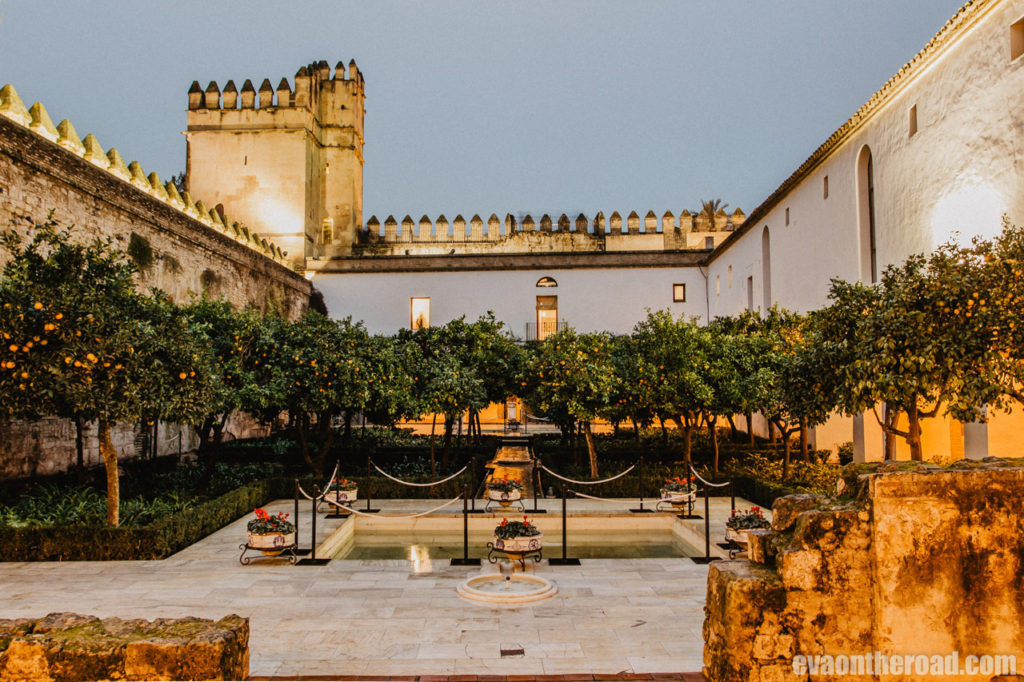 Juderia – a Jewish quarter full of narrow winding streets, the beginning of which can be found in the immediate vicinity of Mezquita. A small synagogue was built in Calle de los Judíos street, it is the only one in Andalusia.

Templo Romano – now only the remains of a former Roman temple, which was discovered in 1950 when the town hall was enlarged. It is located between Calle Claudio Marcelo and Calle Capitulares streets (less than 1 km from the mosque). The temple was built in the middle of the 1st century AD entirely of marble. Its remains can be admired today only from a distance, because the area is surrounded by a fence. There is probably a restoration work in progress. 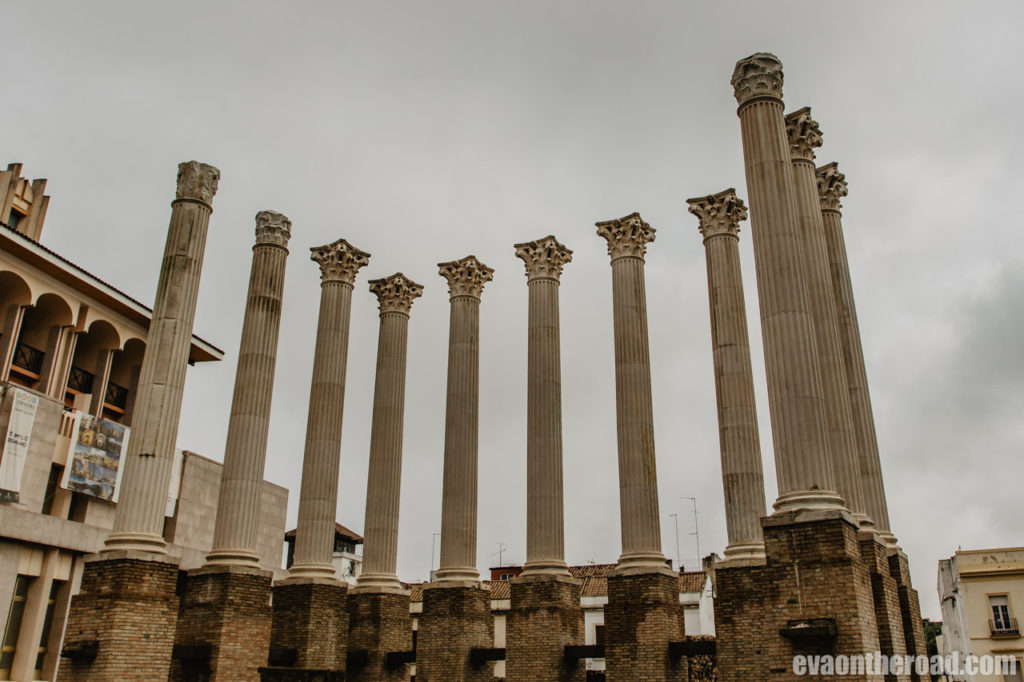 Plaza del Potro – a small square in the centre of which there is a fountain with a statue of a foal (potro). If you stand with your back towards the fountain, go down in the right-hand side direction and enter a courtyard of Posada del Potro, a former coaching inn mentioned in Don Quixote. Admission is free and there are various exhibitions. 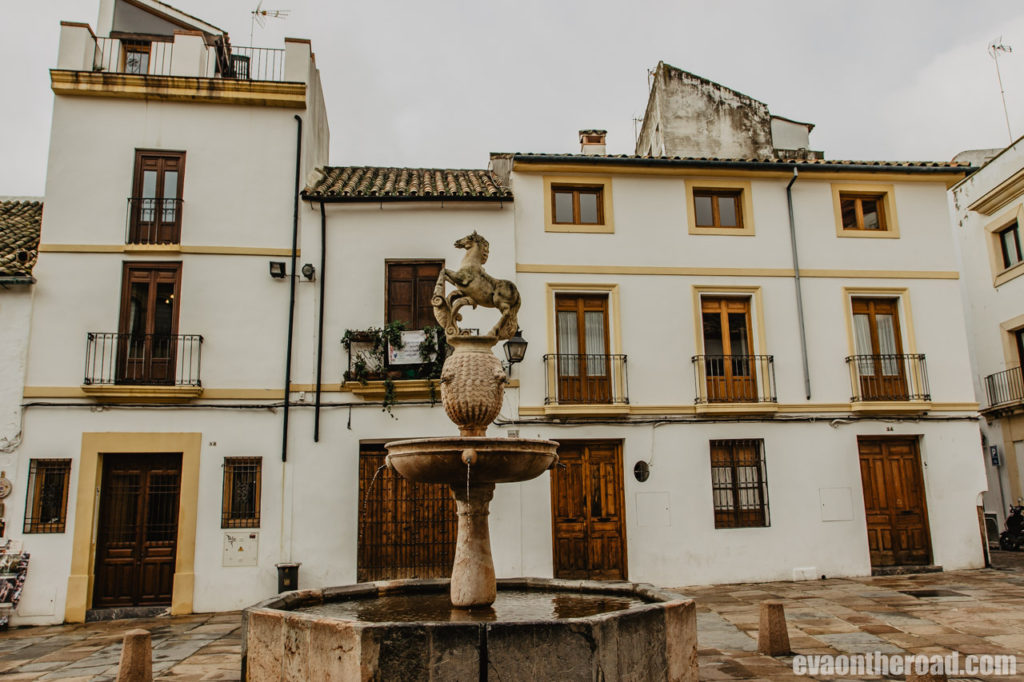 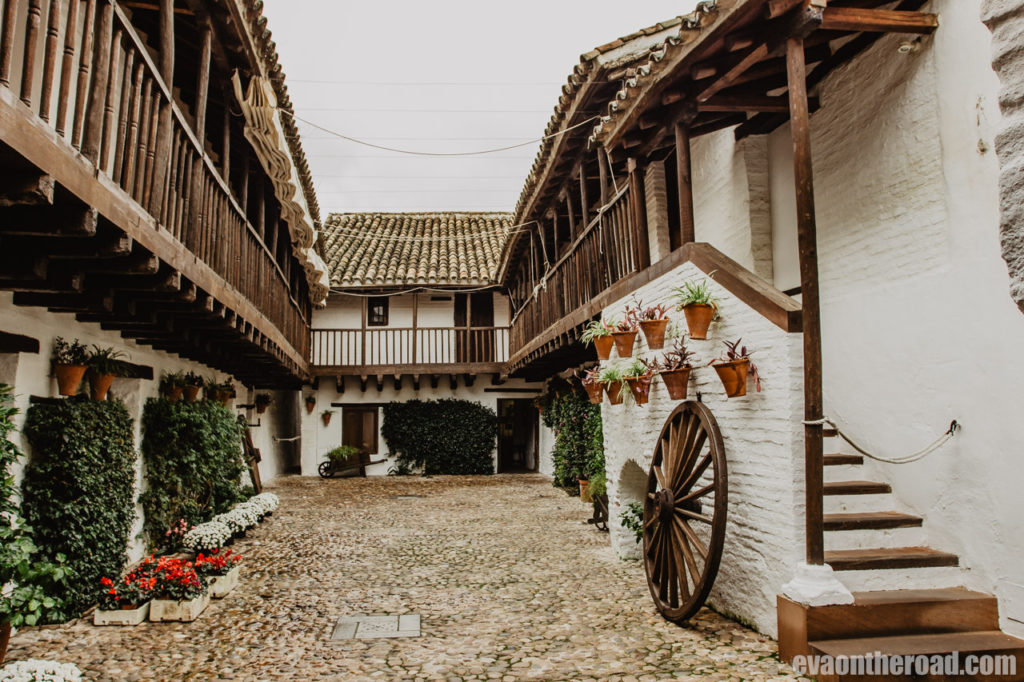 Ruta de Patios – in Córdoba there are many houses with beautiful patios. Usually you will not get inside them (if you are not accommodated in one of these houses), but you can take a tour of 5 selected houses, where after buying a ticket you knock and the owners will let you go inside to explore the yard. They will give you a brief explanation of what was in the house before. All yards will amaze you with plenty of flower pots and boxes in which everything grows. In the spring, when everything blooms, it must be an incredible spectacle. Admission: 5 EUR to 5 houses: we were here out of season, when only 3 houses were open and it cost us 4 EUR / person. 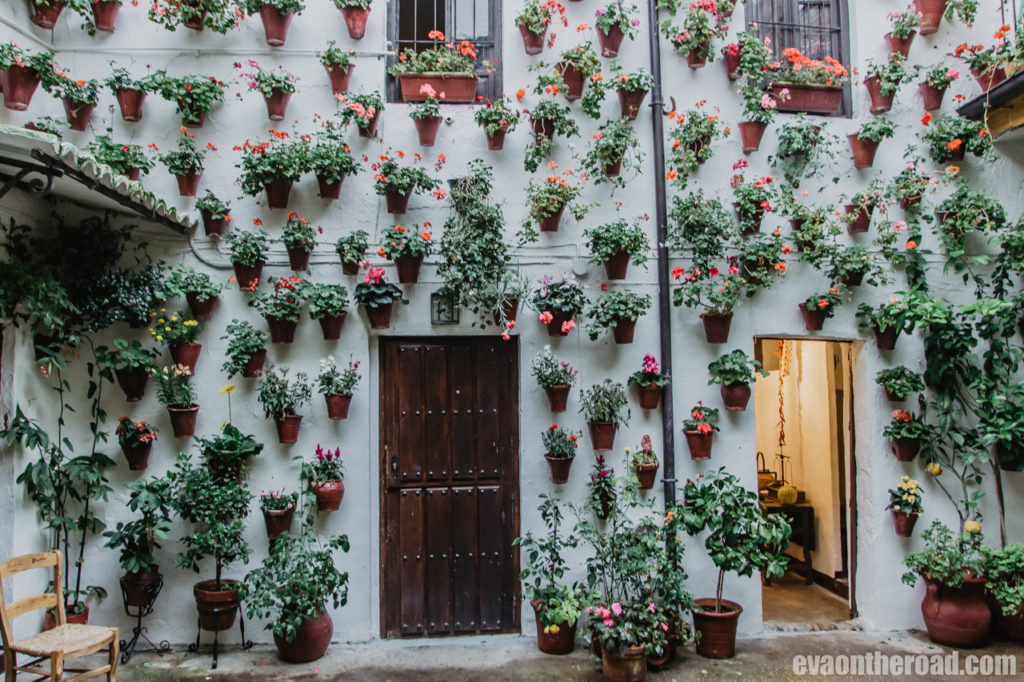 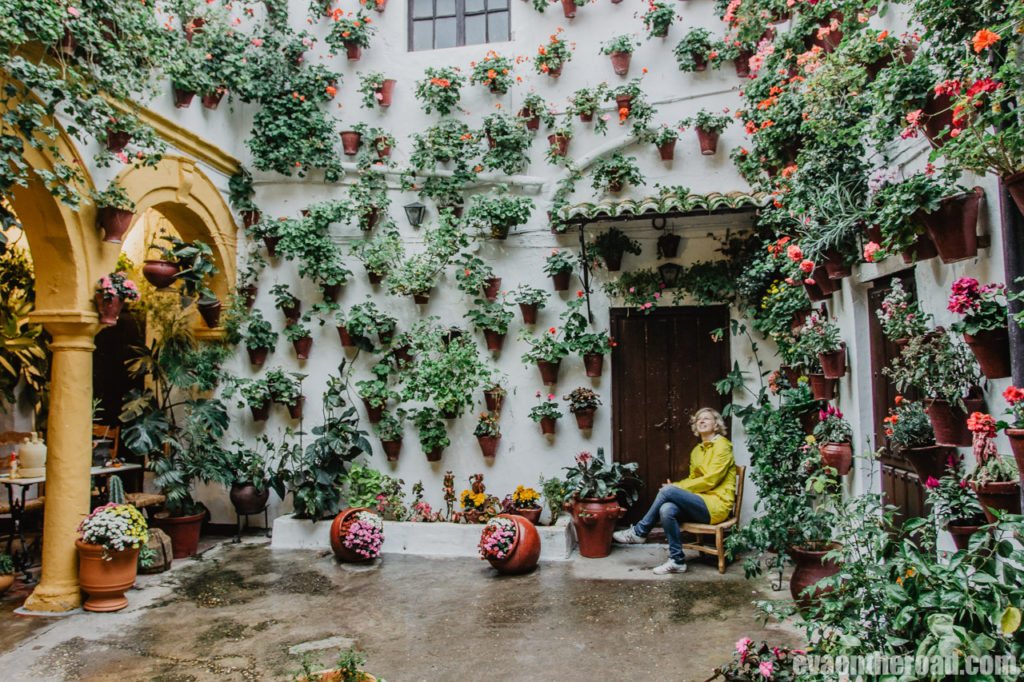 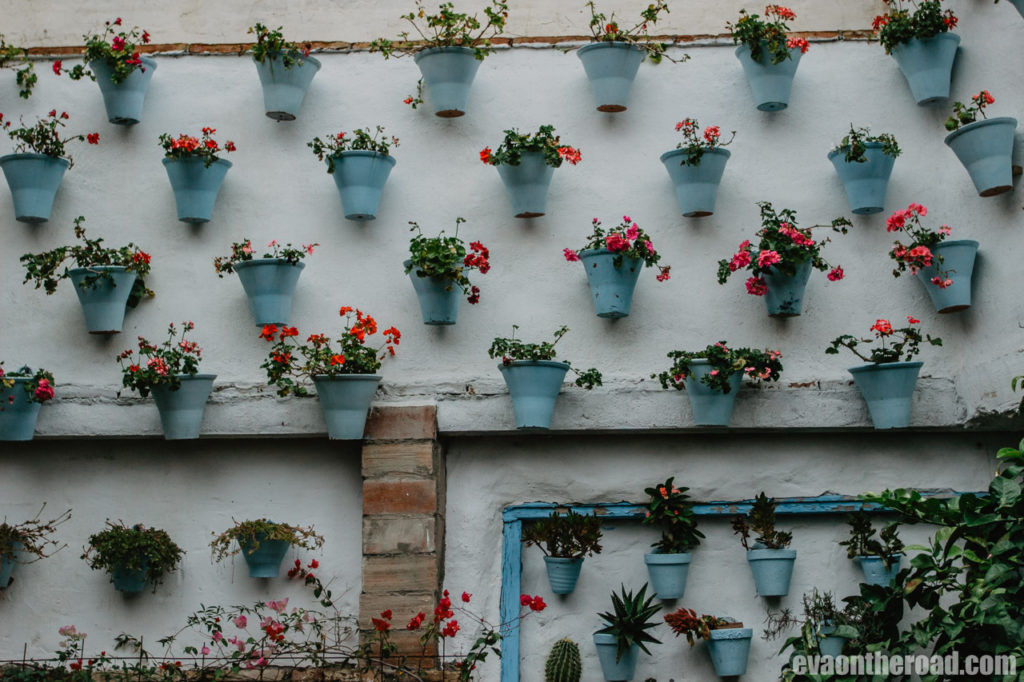 Medina Azahara – about 10 km from Córdoba you will find the remains of a palace city that Abd ar-Rahman III built. Unfortunately, the monumental buildings of that time have not survived much and although the site is reconstructed, you will find here mostly remains of buildings; about one quarter of the excavations will be accessible. However, here is a renovated part of a palace with arches similar to the one in Mezquita that might help you imagine how rich and magnificent the city once was. In addition, it is located at the foot of the Sierra Morena mountains and offers views of the surrounding area. Admission: first you arrive at a parking lot, in the vicinity of which there is a museum about the history of the site with various findings. This museum is free for EU citizens. In the parking lot you have to get on a green bus, which will take you directly to the site (about 2 km). The bus costs EUR 2.50 / roundtrip and runs every 20 min. 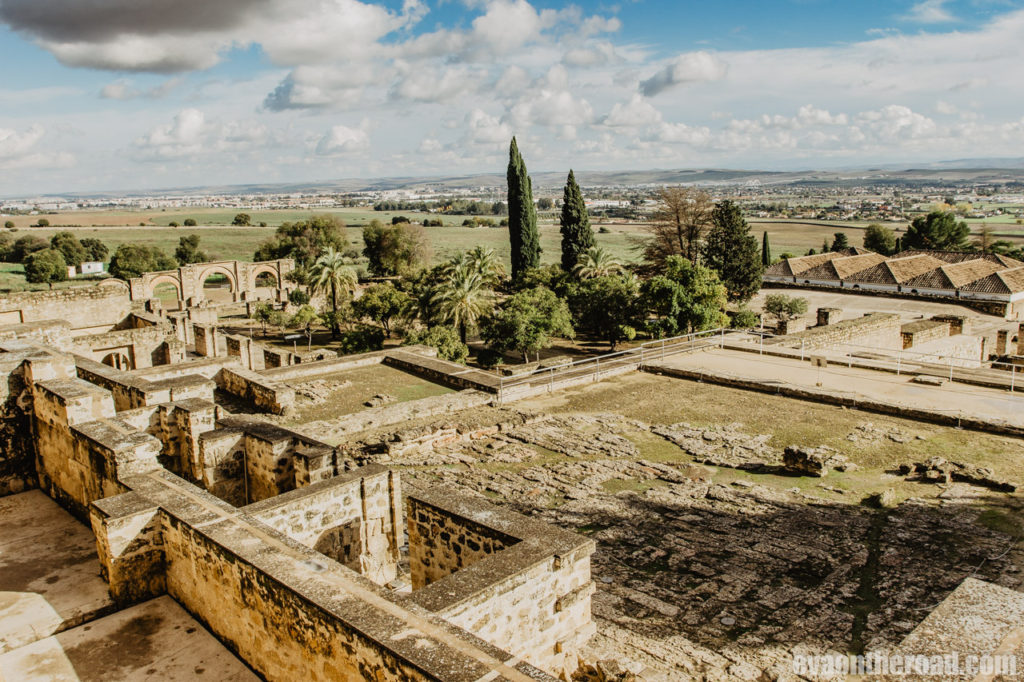 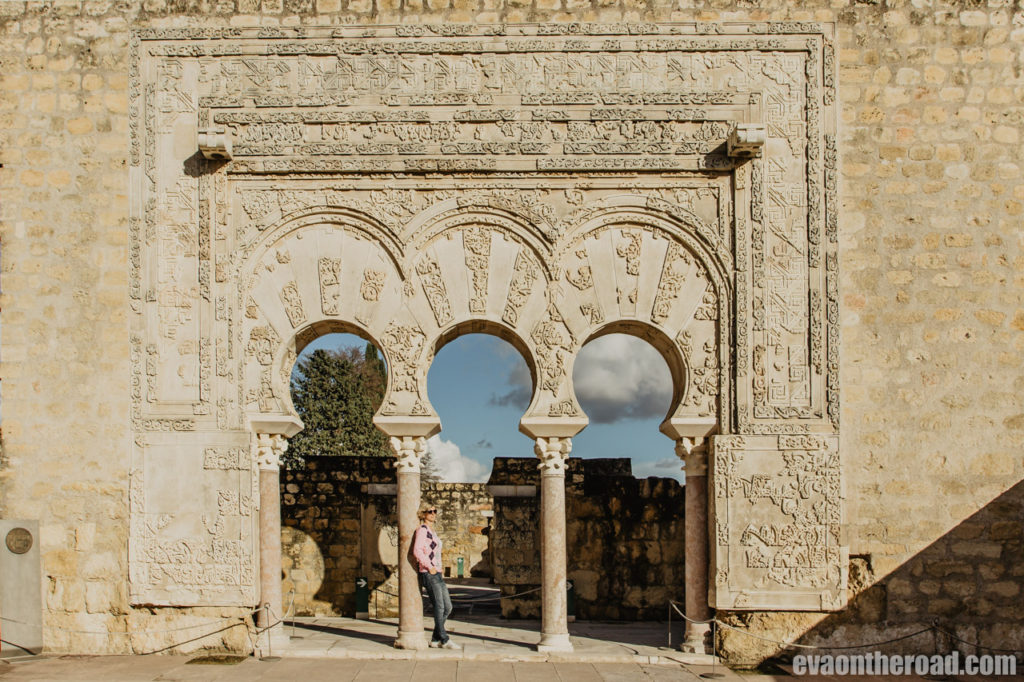 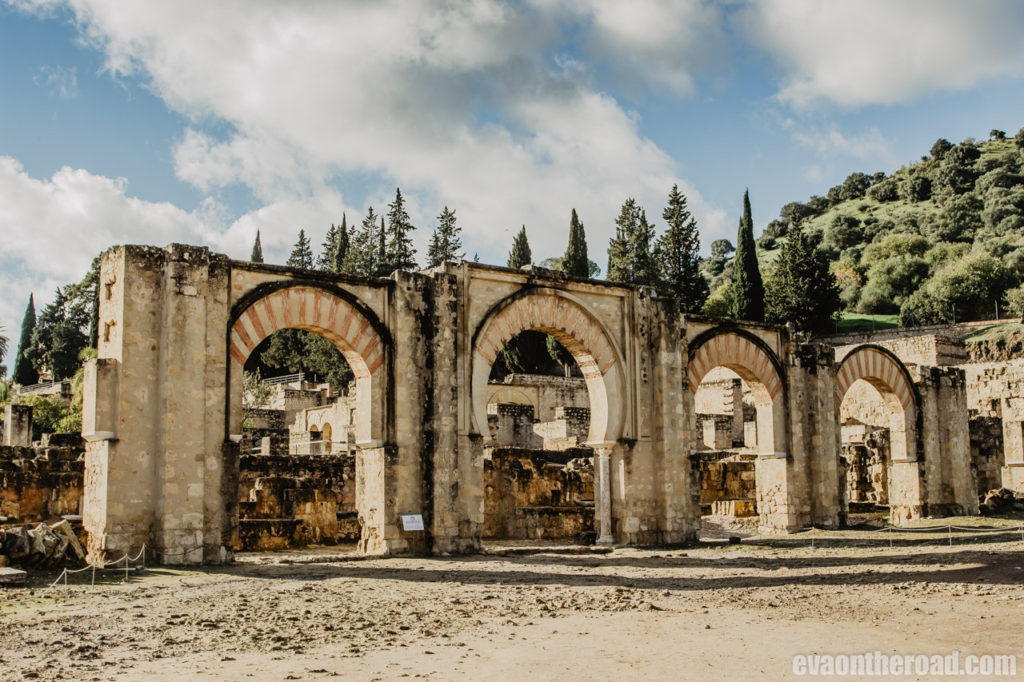 VThere are plenty of guesthouses and hotels in all price categories in Córdoba. If you want to splash out, stay in a local parador. It is a network of a state hotel chain where hotels are located in former palaces, monasteries or castles and are stylishly and mostly luxuriously furnished. There are hundreds of them all over Spain. The night will cost you from 100 EUR upwards (but on the Internet you can get early booking and better price). We lived in Hospedería Los Angeles in Consolación 9 and one night was to EUR 30 (double room with a private bathroom).

What you have to taste

In Córdoba you have to taste two specialties – salmorejo and tortilla de patata. Salmorejo is a very thick vegetable soup that is served cold. It is based on tomato puree, garlic and wine vinegar, sprinkled with jamon and you might also find eggs. Some restaurants do it only in summer, because it is intended to cool you down in a relentless heat. It is really rich and it was a challenge for two of us to eat one portion together. Another local specialty is tortilla de patata or potato omelette. Have it in Bar Santos right next to Mezquita. The chef first puts sliced boiled potatoes, eggs and onions into huge rounds and then cuts cake-like slices. One portion costs EUR 2.30, plus a glass of wine for EUR 2, and with this great food you can watch the rush around the mosque in front of the bar. 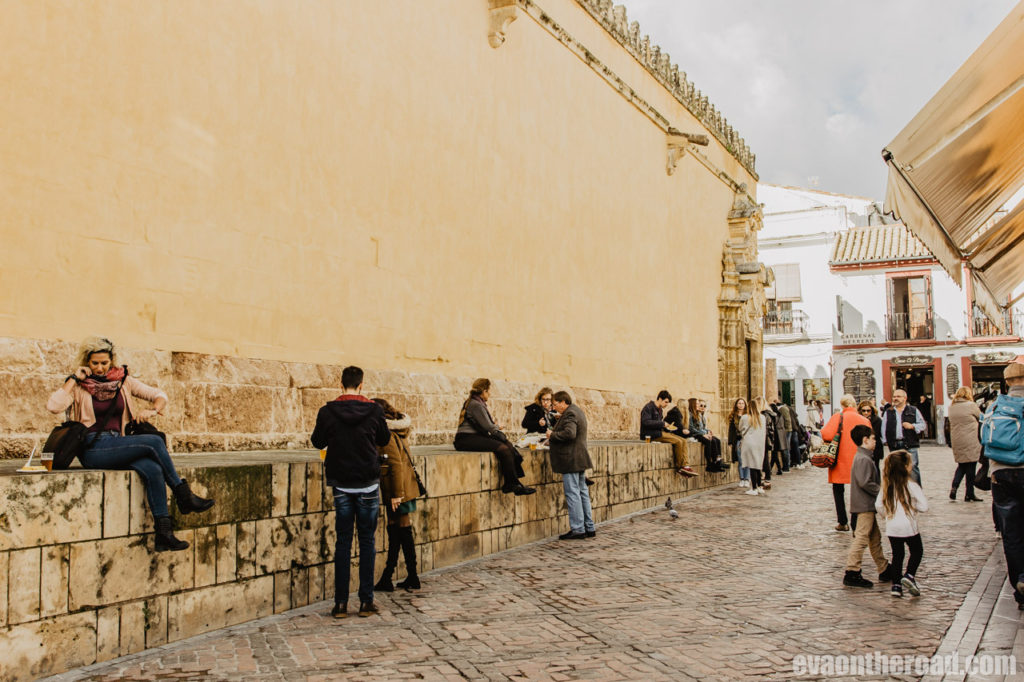 How to get there

We rented a car and from Malaga it is 170 km, which we made in about 2 hours. You can also get there by ALSA buses in about 2.5 hours, which will cost you from EUR 7.50 (depending on when you want to go and how much in advance you buy tickets. You can buy them on their website). The last option is train – Córdoba lies on the main line between Madrid and Seville. Traveling from Seville in less than an hour, it costs you from 12 EUR. Train from Málaga will take almost the same time, but you will pay min. EUR 20 (tickets here). The historical part of the city is relatively compact, only a small part of the sights is a bit aside, but you can easily walk around. 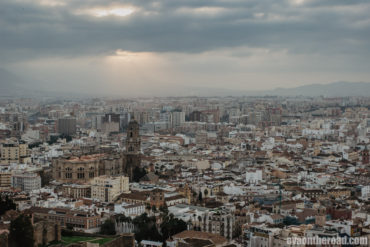 Málaga is a Mediterranean seaport on the famous Costa del Sol, where the temperature rarely drops below 15 degrees. It is a tangle of picturesque streets, as well as wide boulevards full of tapas bars, ... 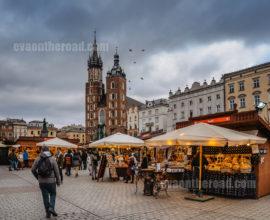 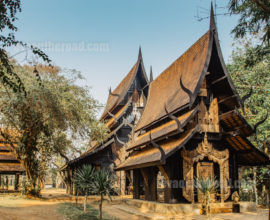 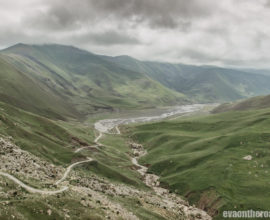 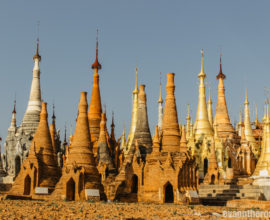 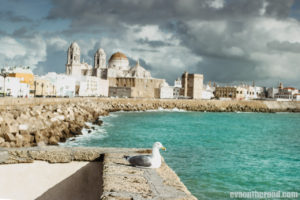